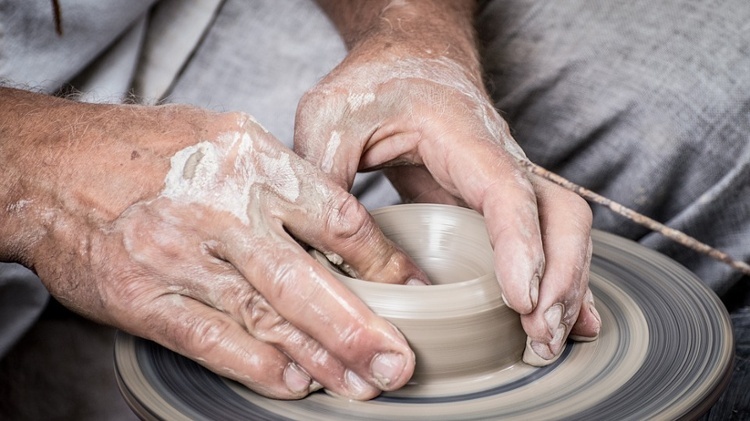 The expression about one having “feet of clay” has two primary meanings: it can refer to a character flaw, usually in a person of some importance; or it is the realization that a person you admire, like a parent, is – in fact – a mere mortal.

Neither circumstance is particularly damning as much as it is revealing. It’s interesting to me that clay is chosen as the substance representing a flaw or of being ordinary. When I was a kid, I learned to throw pots and other creations in a school program. The clay I saw was the raw material of something new, useful, beautiful, and imaginative. Clay became and stayed all of those things if and when it was fired correctly in the kiln. If not, well, it degraded, it failed, it returned to form.

Recently, when faced with a few clients demonstrating that they were returning to old, not so good habits, I thought of what I had learned in pottery class. It occurred to me that my clients, whose brains’ wiring had been updated (and I dare say upgraded) to overcome these lesser habits with more productive ones, were returning to form. Somehow, we’d failed to properly fire them in the kiln of development and change. I tested this idea with a colleague by saying something very scientific like, “We need to throw [their] ass back in the kiln and fire that sucker up!”

The funny thing is, that’s essentially what we did.

I often share with clients a few truths about the process of evolving as a leader. Since this evolution necessarily involves behavior change, the reality is that – in the words of a trusted coaching mentor: “relapse is inevitable.” It’s inevitable, but not defeating. In fact, making someone awaren of this reality helps them get back on the path to better more when they stray. The greater challenge is when one steps off that path and there’s no one there to see her. It’s the iterative process of “firing” someone in the kiln of change that helps them stay the course. And therein lies the inherent challenge faced by coaches and their clients – how much coaching is enough? Am I ever done? Hmmm. Let’s try to answer that this way ...

The difference between the brain and clay, since that’s our metaphor, is that the brain is dynamic. This is a good thing, as this is what allows us to continuously learn and grow. The upside with clay is that, once we fire it, it’s done. The brain can be thrown – using the potting term, but it can’t truly be fired – or at least fired only once. We have to continuously work to retain the good habits we work so hard to acquire and apply. To stay “fired:”

And, lastly, but surely not least – get a coach, keep a coach, trust your coach. This person needn’t be hired or credentialed, though that has its benefits. This person must be present, trusted, and willing and able to ask questions, call you out while not judging, and support you every step of the way – including those occasional lateral or backwards steps.

Jerry Lewis used to close his annual telethon with an emotional rendition of You’ll Never Walk Alone.In pursuit of our ever better selves, none of us should walk alone. Your coach is your kiln, and you need her to throw your ass in and fire that sucker up every now and again…or you may, indeed, be left to walk and work alone.

How to Create and Drive High Performing Teams at Work, Even if Remote

Inevitable: The Future of Work Top 5 Podcast Episodes of 2020