The Great Revolt, 4 vs. 5 Days, Pandemic Winners & Losers, and Branson to the Moon

This just in: People aren’t simply quitting—they’re making a statement. Check out how 9 Burger King employees in Lincoln, Nebraska communicated they were out after working in the kitchen with no air conditioning for weeks. 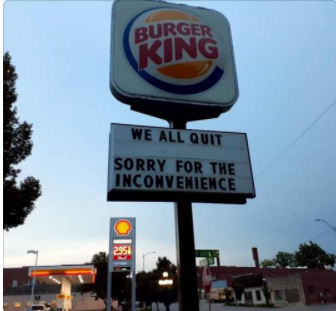 In addition to the lack of air, employees were also working longer hours to cover widespread staffing issues, which is something everyone needs to take note of as over 1 million people quit their jobs in June and 4 million in April.

Employees who stay at a company after their colleagues leave are often left burdened with more work and higher expectations. This can create an environment that is difficult to succeed in, leading many employees to abandon the team as well out of frustration or fear for their own job security.

The 5-DayWork Week is Dead

And while people are leaving their jobs at record rates, employers are desperately trying to figure out if they can keep their best players, and if so...how?
One idea that’s been swirling for years but is catching more interest now is the 4-day work week. This article breaks it down beautifully, starting with the history of the Monday through Friday schedule and what is possible today thanks to a few courageous companies accommodating people’s evolving expectations, hopes, and dreams (like flexibility and autonomy).

Whether it’s hourly workers frustrated with contingent schedules or more highly-paid salaried employees tired of working 60-hour weeks, there’s a clear trend emerging: people are taking back the power to find meaning in their day-to-day routines.

The bottom line? The Future of Work has arrived.

Pandemic Winners: Billionaires (Not from China)

While some employees are quitting, an especially brilliant few have found a way to benefit from the pandemic. Case in point: US Billionaire Pandemic Wealth has increased by $1.6 Trillion, or 55%, representing one-third of gains over the last 31 years.

Whether measured over 13 months or 31 years, the growth of US billionaire wealth is both astounding and troubling based on Forbes data as of April 12, 2021. The reality is that wealth growth has perversely accelerated over the past 13 months during a global pandemic, creating a larger gap between the have and have nots. But the piling up of fortunes at the top has proceeded at a rapid clip for decades, even as the net worth of working Americans lagged and public services deteriorated. Read more about the top 6 American “centi-billionaires.” Notice anything about who is on the list?

Sure, Americans may be raking in the dough, but things are looking different for Chinese Billionaires. This article explains how the age of unfettered gains for China’s ultra-rich now appears to be coming to an abrupt end.

Pandemic Winners: Billionaires (Not from China)

While some have benefitted from the pandemic, others have been left behind. Take women, for example, who lost more jobs than men during COVID and took on a greater share of the additional child care burden all at once. One startling report even found that Covid set back efforts to close the gender gap by 36 years.

And what’s even more troubling yet (although not surprising) is that during the pandemic, female startup CEOs cut their pay by 30% compared to male CEOs who gave themselves a modest raise. The article astutely points out that women took on the burden both at work and in the home.

Looking to follow someone who often gives great examples of how equity can happen? Follow Dan Price on Twitter or listen to Scott Case interview our Partner Jeff Cherry, CEO of Conscious Venture Labs, which has built a program that supports minorities that others don’t or won’t. Jeff also was JUST featured in Baltimore Business Journal for quadrupling membership with a hybrid model. Well done, Jeff!

It goes without saying that we’ve taken many steps back when it comes to creating a world that’s equitable for all. However, it’s not ALL bad, and recognizing progress is critical to making meaningful progress.

One story we’re smiling about this week? How 14-year-old Zaila Avant-garde won the 2021 Scripps National Spelling Bee on July 8th. So, why is an African American winning newsworthy? Because not so long ago, Black children wouldn’t have been able to compete and were routinely sidelined from participating on the national stage until the 1964 Civil Rights Act. She’s only the 2nd black winner in the spelling bee's entire history. Congrats, Zaila!

Transitions are Just as Important as the Race

We’d be crazy not to boast about our SHIFT Performance Consultant, Jaime Trochiana, who raced in the Philadelphia Sprint Duathlon against 400 women and won a medal.

For those of you new to the term Duathlon, it’s basically a giant sprint: a 1-mile run, 9-mile bike race, and a 5K run. Winning is cool, but what’s even better is that she was the ONLY contestant in the top 10 that didn’t have a training team, performance coach, or sponsor (even though she’s a performance coach by day!) and had several disadvantages going in. While she’s our favorite, she wasn’t even on their radar to win, and you can actually hear the announcer say, “hold the globe, here comes Jaime Torchiana of Downingtown.”

True to form, when I asked Jaime about the race, she mentioned that transition times are key and that she’s been inspired by Formula 1’s pit stop strategies.

What are the pit stops/transition points in your business, and how are you helping your employees take advantage of them?


Listen to Jaime and Andrew Freedman's Webinar: 5 Keys to Retain your Rockstars.

Transitions are Just as Important as the Race

Think twice (we won’t) before grabbing your next cup of coffee: This is YOUR mind on Plants

Dreams Can Come True—Branson to the Moon: "I have dreamt of this moment since I was a kid, but honestly, nothing could prepare you for the view of Earth from space.” — Branson, 70, after landing, at a rare loss for words. "It was just magical. I'm just taking it all in, it's unreal." We’re big fans of Sir Richard Branson and had the opportunity a few years ago to hang with him at his home base in Necker island with a group of killer people called the Mavericks, led by a cool duo named Yanik Silver & Sophia Umanski.

We can’t congratulate Branson without sharing this moment between him and Andrew Freedman, Managing Partner of SHIFT and author of THRIVE - :) 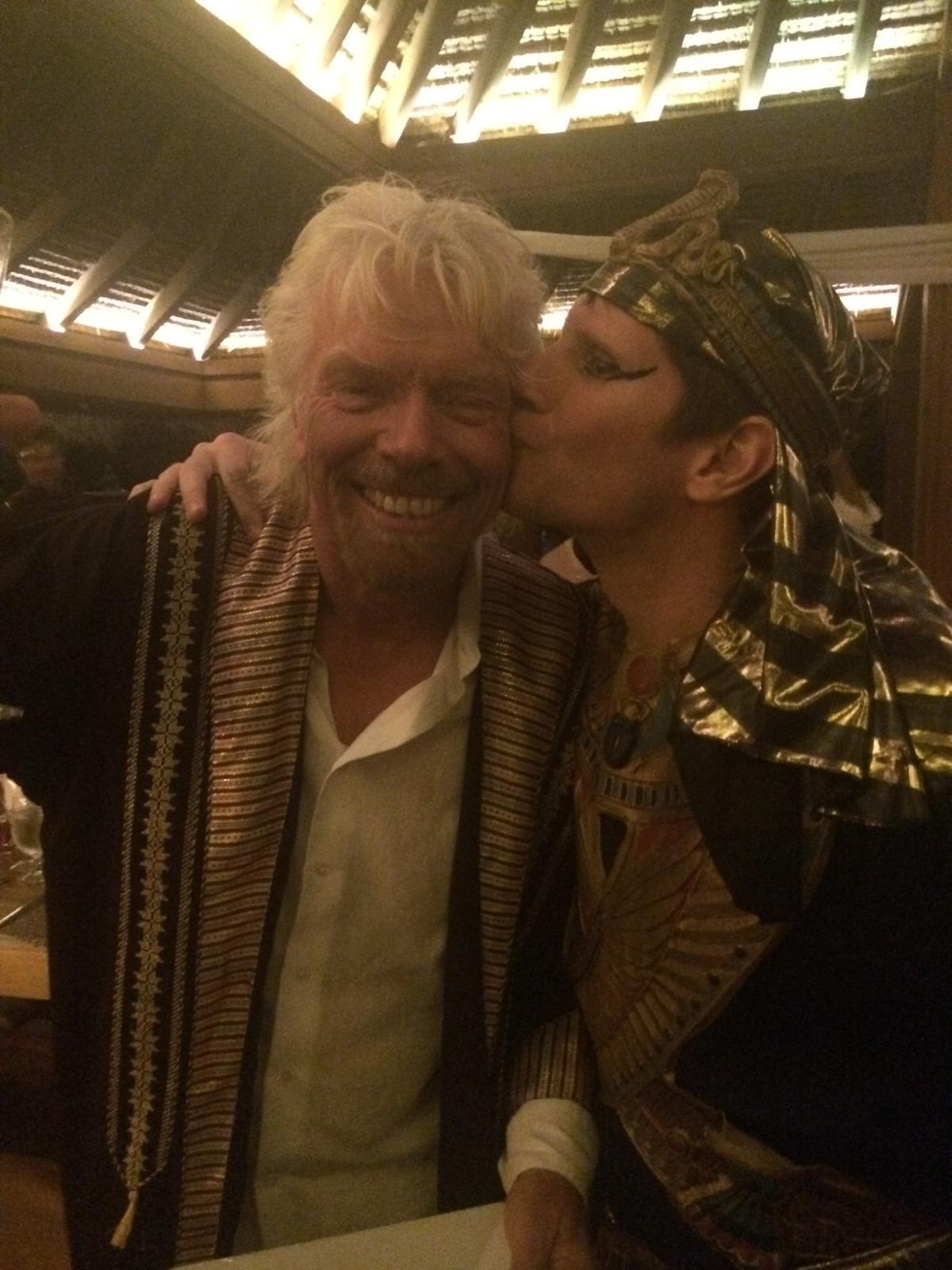 Speaking of dreaming again, maybe It IS time to change the channel to  one of JOY! Emile Durkheim coined the term “collective effervescence,” which describes the sense of energy and harmony people feel when they come together in a group around a shared purpose. Can you recall a get-together where your team experienced this?

Coming off several big gatherings/retreats that we facilitated with 3 different clients, that sense of harmony during (and the feedback afterwards) was present throughout.

Here’s one response we received: “I can’t thank you enough for your magic! You have become a bloodline for the heart behind our mission, and you captured brilliance, vulnerability, and courage.” Have a similar feel-good moment to report? Share your story with us!

Are You Listening to Your Employees?

Capture valuable employee insights and empower yourself to better show up for their current needs with our Post Pandemic Survey and Strategy Program.